Yet another phrase book in IPA! 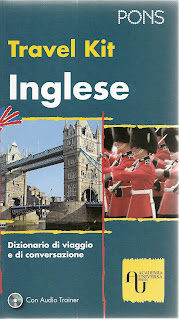 I was so impressed by the quality of the Italian-Spanish phrase book I talked to you about last weekend that on Monday I went to a famous bookshop in Rome to look for a similar book but with English transcriptions. And I managed to find one! It’s called Travel Kit Inglese: Dizionario di viaggio e di conversazione (2010; Accademia Universa Press).

The book is divided into 17 chapters, two of which contain a short introduction to English grammar and a small bilingual dictionary. As with the phrase book in Spanish, each word/sentence is transcribed phonemically and there is also an audio CD which contains the whole text of the book.

But unlike the phrase book published by Giunti, Travel Kit Inglese is not as accurate as far as phonetics goes. Each page of the book contains at least three or four transcription errors, some of which are just terrible blunders. Have a look at this: 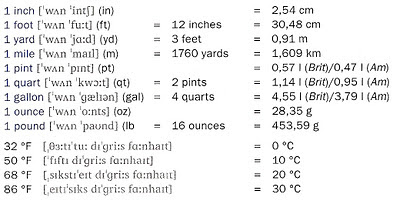 Noticed anything in particular? Apart from the incorrect transcriptions provided for inch, pint, foot, and ounce, what struck me as unacceptable was the fact that the phonetics editor for the book (whose name is not mentioned in the introduction) mistook the word gallon (pronounced ˈɡælən) for galleon, which is obviously ˈɡæliən. Degrees is dɪˈɡriːs rather than -ˈɡriːz, and for some reason Fahrenheit is fɑːnhaɪt, instead of ˈfɑːrənhaɪt or ˈfær-.
On page 26, which is about organizing a trip abroad, we read this:

How many mistakes can you spot? Here the strong form of am is used rather than its weak form and so it is for the preposition of. In the utterance at the bottom, weə is without its linking r, which is what native speakers would naturally use in this context, and no stresses are provided for some of the content words which come before boating. What is worse is that the transcription furnished here represents exactly what one hears on the CD, as the voice of the speaker used in the recordings is not a real one but a computerized one. And we know what can happen with synthetic speech: it often fails to reproduce weak forms and intonation properly.
In the section dedicated to the topic “eating out”, I notice the word restaurant is always transcribed as ˈrestərɔ̃ːŋ (p.106). Although this is a possible variant, which Roach et al. (2006) decided to prioritise in CPD, I find it amusingly old-fashioned. Even Jack Windsor Lewis as early as 1972 regards this type of pronunciation as highly unlikely. In his Concise Pronouncing Dictionary of British and American English he notes (pp.xv-xvi):

“Now rarely heard, except from the elderly, is the substitution of non-nasal vowel followed by ŋ for a nasal vowel in words borrowed from French: `pɑŋsɪɔŋ for `põsɪõ (pension) is now likely to sound amusingly old-fashioned possibly even incomprehensible to many educated speakers below retirement age. One or two popular words such as meringue and charabanc have settled into such pronunciations firmly but in most words with French nasal vowel origins a nasalized English vowel is heard”.

The book also sometimes utilises symbols which are not exemplified in the introduction (for example i and u), and some of those symbols which are exemplified in the introduction are simply defined poorly. The schwa, for instance, is described as a “suono vocalico atonico, cortissimo e senza qualità” (p.22) (‘an unstressed vowel sound, very short and without quality’).

In conclusion, I think the only use I can make of this book now that I’ve bought it is to show students how never to transcribe English speech or describe sounds! What do you think?

UPDATE: Have a look at what John Wells has to say about Travel Kit Inglese here.
Posted by Alex Rotatori at 6:50 pm