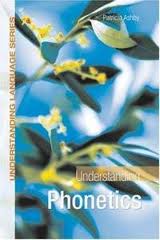 I’m reading Patricia Ashby’s new book Understanding Phonetics (2011, Hodder Education). Marc Swerts (Tilburg University, The Netherlands) describes it as being “an excellent introduction into the field of phonetics” and “an impressive account of the articulatory, acoustic and perceptual aspects of human speech sounds” (back cover).

I quite agree. The book is just fantastic, and I’m already using it with my undergraduates at the Università degli Studi della Tuscia.

Petr Rösel recently discussed some of the features of Dr. Ashby’s Understanding Phonetics on his blog, Kraut’s English phonetic blog. You can read his article here, if you’re interested.

As is almost inevitable with textbooks containing phonetic symbols, sometimes typos are made which might be a bit embarrassing for the author(s). In Understanding Phonetics, for example, we find this on page 44:

I wonder if these are mere typos or real mistakes on the part of the author. The Italian articles are il, lo, la (for singular) and i, gli, le (for plural). Li as an article is not to be found in Standard Italian today, although some people still sometimes use it in dates, as in Roma, li 12/11/2011. It is, though, very common in the broad accents of the area in and around Rome, where a phrase like, for instance, i romani (‘the Romans’) can be heard as li ɾoˈmani.

As my readers will also know, the palatal sounds ʎ, ɲ, ʃ, and the alveolar affricates ts and dz are, in Standard Italian pronunciation, always pronounced double when in intervocalic position. This means that figlio is ˈfiʎʎo and not *ˈfiʎo.

Patricia ends the section on approximants noting that “in a large number of Italian accents, there is considerable friction involved in the pronunciation of [ʎ], creating a voiced palatal lateral fricative (for which there is no established IPA symbol)” (p.64). Quite right! That’s how I sometimes find myself pronouncing words like foglie (‘leaves’, n.) or parlagli (‘talk to him/her’). This type of pronunciation is also extremely common in and around Naples.
Posted by Alex Rotatori at 10:55 am