Understanding and speaking un-English in 21 days 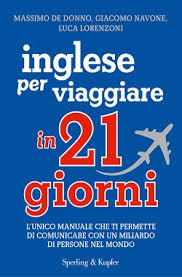 The book you see here to the left is called Inglese per viaggiare in 21 giorni (Improve your English on the move in 21 days.). It has just been published by Sperling & Kupfer (ISBN 978-88-200-5978-1, 228 pp.) and costs 12,90 euros. The authors, Massimo De Donno, Giacomo Navone and Luca Lorenzoni, are not linguists or phoneticians but public speaking experts.

The book, aimed at Italians intending to understand and communicate clearly and successfully with native English speakers, is divided into 21 chapters which deal mainly with how English is spoken in the UK and around the world. The authors describe the pronunciation of RP – as they still call it –, Scottish and Irish English, American English, South African, Australian and New Zealand English. They do so by providing transcriptions in IPA (as well as in a kind of simplified 'phonetic' spelling system) of all the words and expressions that they present. Symbols and their use are discussed at pp. 38-48. The book also has a companion website which, at the time of writing, contains no resources related to it.

The three authors must have written the book in a hurry because the whole work is riddled with inaccuracies and false statements. It is not just a question of possible typing errors or misprints such as jeləu (yellow) instead of (ˈ)jeləʊ (p. 59) or teik advais (take advice) instead of teɪk əd(ˈ)vaɪs (p. 66). What we have here is serious mistakes about the 'phonemic spelling' of English words as well as phonetics in general. There isn't a single page which doesn't contain at least one error.

The pronunciations they give are for RP (= General British (GB)), which they claim is only spoken by 2-3% of the British population (p. 3). This is totally untrue. Please read here. As you can see, the transcriptions for learn, see and blue are wrong: in GB learn is always lɜːn not lɜːrn; see is siː or sɪi, not sɪː; and blue is never blʊː but bluː or blʊu. (On page 98, though, crew is given as kruː, not krʊː, and tree is both trɪː and tʃriː on page 44, which seems to suggest that the authors are unaware of the difference between the sounds uː and ʊ(ː), and between iː and ɪ(ː).)

On page 41, nose is transcribed nɒʊz, and on page 42 gnome is both nəʊm and nɒʊm. As you know, nose is nəʊz and gnome is nəʊm: the ɒʊ diphthong is used in GB only before dark l, as in cold: kɒʊɫd. See here.

And what do we make of the pronunciations of dad, feet, bag, horse, universe, piano, serpent, tree, cheese, teeth, and rose on pp. 42-43? 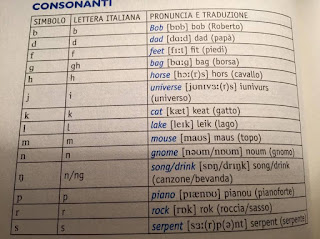 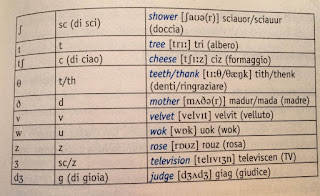 They're all completely wrong and never to be heard in GB.

On page 43, the phrase that thing is transcribed as ðæ(t) θɪŋ and hot day is hɒ(t) deɪ. The t is in brackets because – the authors stress – in these cases it may not be sounded. Of course that's false. In that thing and hot day, t can never be omitted, but it can be replaced by a glottal stop, ʔ.

On page 45, ŋ is described as a sound produced with your tongue low in the mouth. Please see this picture from Cruttenden's Gimson's Pronunciation of English (Routledge, 2014, p. 216) which clearly shows that the back of the tongue is raised towards the velum when you articulate ŋ. 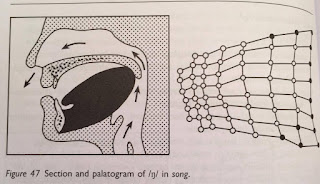 Connected speech and stress are also extremely problematic: p. 128 has aɪ kʊd hæv kʌm bʌt aɪ dɪdnt fɪːl laɪk draɪvɪŋ (I could have come but I didn't feel like driving), instead of, for example, aɪ kəd əv kʌm bət aɪ dɪdn fiːl laɪk draɪvɪŋ; Does she attend your school? (p. 52) is transcribed as dʌs ʃɪː ətend jɔː(r) skʊːl rather than, for instance, ˈdʌz ʃi ətend jɔː ˈskuːl; the modal going to is given as ɡɔɪŋ tʊ on page 95; and on p. 79 police is pɒlɪs in IPA and pòlis in the authors' 'phonetic' spelling system. This seems to indicate that de Donno, Navone and Lorenzoni pronounce police wrongly in GB as ˈpɒlɪs (or possibly ˈpɒliːs) rather than p(ə)ˈliːs. The 'phonetic' spelling system they use is also hopelessly inaccurate. In their previous book, for instance, the authors give lady as 'ledi' (p. 42) and bus as 'bas' (p. 47): a monophthongal eː in lady is not GB but a feature of many regional accents spoken in the UK; bus is bʌs or bɐs in GB, not bas, as this latter pronunciation corresponds to bass, a sea or freshwater fish that is used for food. 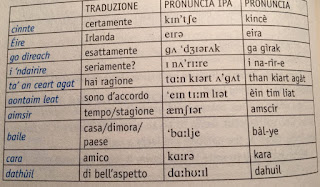 The pronunciations given are in Irish (English), the authors say – once again, most of the transcriptions are entirely wrong. 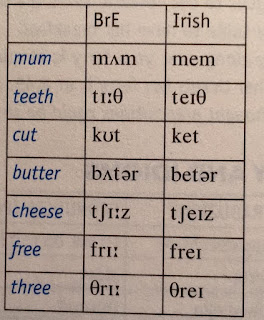 I don't know where De Donno et al. took this from – the book contains no references.

The information provided about English grammar is also at some points fairly inaccurate, as when, on p. 192, we read this: 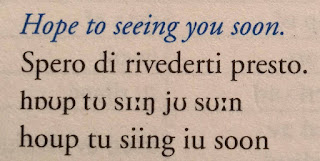 As you know, in Standard English hope is always followed by to + infinitive, never by to + verb + ing.

All of the pronunciations indicated are wrong.

I very much hope that all these oversights and errors will be sorted out by the authors before the second edition of their Inglese per viaggiare in 21 giorni comes out.
Posted by Alex Rotatori at 6:57 pm