I've spotted another mistake in The CELTA Course Trainee Book by Scott Thornbury and Peter Watkins (see my blog for 4th July 2010). On page 155 the authors discuss how vowel sounds are produced in English and then provide their own definition of a 'diphthong': "a glide from one vowel to another".
Now, this definition is not complete. If it were so, then the words Lyons - the place in France - (ˈliːɒ̃) and neon (ˈniːɒn) would both contain a diphthong - but they DO NOT because they are characterised by two separate syllables.
A diphthong is then a movement (or glide) from one vowel to another within a single syllable. 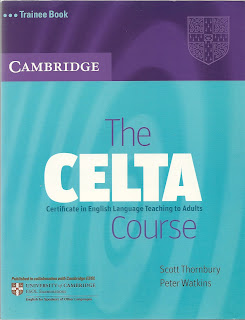 Since yesterday morning, a video has been doing the rounds both on YouTube and in the national news bulletins. You can watch it here. In it, Prime Minister Silvio Berlusconi enhances the beauty of Italy by referring to it as "magica Italia". The video is very nice and the idea of trying to encourage Italians as well as foreigners to take their holidays in our country is laudable.
There's just one thing that bugs me: it's the English translation of the expression "magica Italia" which comes at the end of the video clip. Whoever translated "magica Italia" as "magic Italy" doesn't know that in English the adjective "magico" can be translated in two different ways: magic and magical. The former is the more common and is used in a number of fixed expressions like a magic wand, the magic word, magic tricks, magic spells, expressions that is which are generally related to magic or supernatural powers. The latter, on the other hand, is used in place of magic especially in metaphorical senses like 'wonderful', 'exciting', 'romantic', 'enjoyable', as in a magical country, or magical landscapes.
If you think I'm talking nonsense, you can either read page 230 of Swan's (2005) Practical English Usage, published by Oxford University Press, or check the use of magic and magical in the British National Corpus or in the Corpus of Contemporary American English. That's what I did myself, too, and the answer is that I could only find examples of magical + country and none of magic + country. Which means that the phrase "magic Italy" in the video is WRONG and needs correcting to "magicAL Italy".

PS: Here's a video by the BBC. Notice how Duncan Kennedy, after referring to Berlusconi's "magica Italia" with the expression "Magic Italy", he calls it, immediately switches to Italy's magicAL sights towards the beginning of his report.
Posted by Alex Rotatori at 11:06 am No comments:

On page 156 of The CELTA Course Trainee Book (Cambridge, 2007) by Scott Thornbury and Peter Watkins, the authors discuss the vowel and consonant sounds of English and remark that "[f]or teaching purposes, the sounds of English are often displayed in the form of a phonemic chart":

In the phonemic chart on the left are listed the vowels and consonants of RP, whereas in the one on the right you can see the symbols corresponding to the sounds of North American English. (It should be noted though that on page 155 the authors refer to RP using the wrong expression "Standard British English", thus confusing an accent of English with a dialect.)
As is evident from the image above, the systems of transcription used in the charts are similar but not the same. The one on the left in fact conforms to the principles of the International Phonetic Association (IPA); the one on the right doesn't, as it follows a different AmE tradition, namely that of Trager and Smith. This tradition analyses the English long vowels and diphthongs as consisting of a short vowel plus one of the semivowels (called "peak satellites") j, w, h, the latter being realised postvocalically either as a schwa offglide or as the lengthening of a mid or low vowel. In addition, stress is marked by putting acute or grave accents over vowels (é, è), not by putting marks high up before the stressed syllable as in the IPA.
For me both systems of transcription are perfectly ok; it's just that I don't think it's necessary having to teach or learn two relatively different systems of notation at the same time. Indeed, it's a complete waste of time! Also, it seems as though Thornbury and Watkins were suggesting that you can only use IPA for RP and the Trager-Smith system for General American, which just isn't true. Either system will do! Wouldn't it be much easier then for both teachers and students alike to go for just one system without having to resort to using two systems in order to highlight the differences in vowel realisation and inventory between RP and General American? Phonetics and phonology is already a very complex part of the teaching of English: why do you want to make it more complicated than it is?
By the way, if I had to choose between one system or the other, I would definitely go for the IPA one. The Trager and Smith tradition in fact isn't trendy any longer and it wasn't so even when John Wells in the 1980s was writing his Accents of English.
Why then teach the Trager and Smith notation system when almost all the pronunciation dictionaries and EFL textbooks on the market nowadays make use of the IPA script?
Posted by Alex Rotatori at 4:45 pm 7 comments: