The sounds of languages 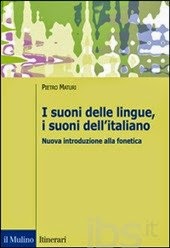 The phonetics book you can see here to the left, I suoni delle lingue, i suoni dell'italiano (3rd edition), was published less than a month ago by Il Mulino. The author is Italian linguist Pietro Maturi, Lecturer in Sociolinguistics at the Università degli Studi di Napoli, Naples, and co-author of the excellent, though now out-of-date, Manuale di fonetica (3rd edition, 2002; Carocci).

It contains interesting information concerning (Standard) Italian connected speech, as when, for example, at its page 64, the word cioè (that is (to say)) is given both one of its citation forms ʧɔˈɛ and its extremely common 'reduced' forms ʧɛ, ʃɛ. Also, on pages 96-97, the author discusses the often neglected phenomenon of stress shift in expressions like lunedì scorso (last Monday), for which, in addition to luneˈdi ˈskor(t)so, Italians can be heard to produce ˈlunedi ˈskor(t)so, even though this latter stress-shifted variant is perhaps to be regarded as not so common as the former.

Unfortunately, the book also contains some – to me – shocking comments regarding the outlines of (the sound systems of) some languages. One of them is to be found on page 77 and it's about what Collins, Mees and I in Practical Phonetics and Phonology, pp. 229-233 (3rd edition, 2013; Routledge), simply call Standard Italian. Mr Maturi says:


['It is important to bear in mind that by standard Italian we mean an abstract and prescriptive system that can neither be ascribed to any particular region in Italy nor can it be said to be the language of any existing individual.']


On p. 135, current (British) English pronunciation is appallingly described as being characterized by the 5 primary Cardinal Vowels i, ɛ, ɑ, ɔ, u and by the secondary Cardinal Vowel ʌ. Of course, this is absolutely untrue. A linguist ought to know that the Cardinal Vowels are not the vowels of a particular language. They're "an abstract measuring system – nothing more and nothing less", underlines phonetician Patricia Ashby in her first-class book Understanding Phonetics (2011, p. 85; Hodder Education):

"Coincidentally, though, languages are found that have one or more vowels that are a pretty close match to an absolute cardinal value. But this is simply coincidence and that must not be forgotten".


Again that is totally incorrect. I wonder if Mr Maturi has ever heard of pre-fortis clipping, the effect by which all English vowels are shortened preceding a fortis consonant. See, for example, this post of mine here. Also, the phonemic symbols ɔ and ɔː that our author uses are completely misleading and wrong: the vowels in GB cord and cod are not just distinguished by their length but also by their quality. They're two different sounds (normally transcribed respectively as ɔː and ɒ), so they can't be allotted the same place in the vowel diagram (p. 135): 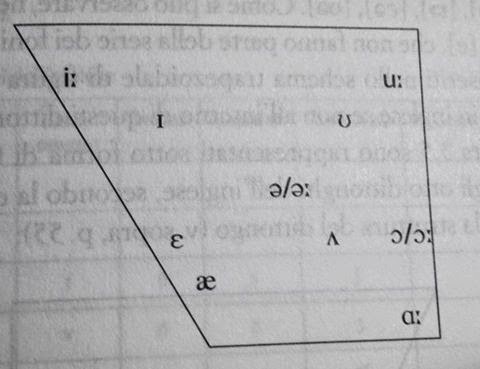 
Not entirely true. General American (GA) ʌ and ə are normally regarded as allophones of the same phoneme, and for some speakers are more or less identical phonetically too (Longman Pronunciation Dictionary, 3rd edition, 2008, p. xxi). That doesn't mean that GA doesn’t have ʌ. Listen, for example, to conundrum as pronounced here by this speaker on the Oxford Advanced American Dictionary. The stressed vowel in this recording is clearly ʌ, not ə as in the unstressed syllables.


I'm afraid Pietro Maturi here is confusing phonemes with allophones: the symbols aɪ and eɪ that he uses are just phonemic. They can't be taken to be phonetically made up of a + ɪ and e + ɪ. Also, what he says about a in particular is incorrect: this sound has been part of GB for a long time now. It corresponds to what is usually (still) transcribed as æ. See the new edition of Cruttenden's Gimson's Pronunciation of English (2014; Routledge).

On page 136, we find a footnote stating that in GB ə is only used in unstressed syllables whereas əː (=ɜː) is only to be found in stressed ones. Not true again. What do we make of pronunciations like, for instance, ˈðə for the, biˈkəz ~ bəˈkəz for because, ˈʤəst for just, ˈwə for we're, ˈən(n)i for only, ˈməz ~ ˈməs for Ms, ˈkəʊvɜːt for covert, ˈkɒnsɜːt for concert (= agreement), or ˈhɒtspɜː for (Tottenham) Hotspur?

On page 139 some words are transcribed in an extremely old-fashioned way:

Notice the ɪ in happy and the pronunciation ˈdɛfɪnətli, now normally ˈdɛfənətli ~ ˈdɛfn̩ətli  ~ ˈdɛfnətli. What strikes me most is the (not always correct/necessary) use of the 'reversed apostrophe' to indicate (weak) aspiration in place of the diacritic [ ʰ ], which Mr Maturi says, on page 61, is less often used than [ ʿ ]. Please note that the reversed apostrophe was withdrawn by the IPA back in 1979 (see the Handbook of the International Phonetic Association, CUP, 1999, p. 173).

The description offered for French is at some points old-fashioned too: the author still uses a in papa and ɑ in pâte, and ɛ̃ in vin and œ̃ in un. I'm afraid neither of the contrasts a-ɑ and ɛ̃-œ̃ are nowadays heard in the French of younger speakers of the standard language (see Collins & Mees, 2013, pp. 226-227).

I hope that all these oversights and errors will be sorted out by the author, as they seriously compromise the value of this phonetics book, which, among other things, contains no sound clips at all.
Posted by Alex Rotatori at 5:02 pm No comments:

Speak Up is an Italian magazine written in English and aimed at EFL students. For several years now it's had its own website where videos are posted of interviews with all sorts of English native speakers. Even world-famous linguist David Crystal has more than once contributed to the magazine: listen to the free podcasts here.

One of this month's clips (and articles) features comedian John Peter Sloan, whose name will probably not sound entirely new to regular readers of this blog. (See my articles here and here.) The author(s) of the post define(s) his accent as "Standard British". Of course this is absolutely not true! His speech is indeed British but not 'standard'. It could be better described as "Regional British English" or – to use Cruttenden's terminology in his new Gimson's Pronunciation of English (Routledge, 2014) – "Regional General British (RGB)" (pp. 81-82). Cruttenden defines RGB as

"the type of speech which is basically GB except for the presence of a few regional characteristics which may well go unnoticed even by other speakers of GB".


Among these characteristics are, for

Some of John Peter Sloan's regional features in this interview include the following:

i) he pronounces have and having a beer without h;

iv) he says here iʔ is instead of GB here it is;

v) the first time he pronounces the word sitting he says it with glottal stop instead of t, and then he 'corrects himself';

vi) his KIT vowel sometimes sounds as close as FLEECE, as in one of his renderings of the word English. (This is typical of some Midland accents in England. John is in fact originally from Birmingham. Listen to how he says fun, cut, nut and us by clicking the link here under "Block 1 - Pronunciation" named "13 Dita in gola; p. 25".)

(A little digression… Recently, there has been talk on the web about the use of the glottal plosive ʔ being perfectly acceptable in today's GB before syllabic l. See for example this article by Pronunciation Studio teacher Maria Kozikowska. She claims that pronunciations like ˈbɒʔl̩ and ˈlɪʔl̩ for bottle and little are "now more and more widely acceptable in an RP (= GB) accent". Again this is blatantly false. Here's what Cruttenden writes on p. 184 of his new Gimson's:

For more on the gaffes made by Pronunciation Studio, see this article by Jack Windsor Lewis, this post and comments on Kraut's English phonetic blog, and this other post on the same blog.)

One final note about the magazine Speak Up: its Language Blog is riddled with incorrect statements and howlers concerning the pronunciation of English. See, for instance, this post, where a reader asks how the two t's in department are to be pronounced; and this brief description of the characteristics of a New York accent.
Posted by Alex Rotatori at 9:15 am 2 comments:

On 29th June 2014, a Camilla Cerrai, probably a nurse, posted the following comment on the website http://www.amazon.it/ under the section devoted to my book:

('It's a book that's only about pronunciation. If you're looking for something on the lexis, phrases etc. typical of medical English, then this book is not good.')


Dear Camilla, the criticism you made is simply unjustifiable. Did you read the title of my book before purchasing it? Did you have a look at the contents page on the publisher's website before posting such an uninformed and adverse comment? What exactly do you mean by "la fraseologia e simili"? Are you sure your English is so good you don't need any help with pronunciation?

Also, what you say about the technical terminology and phrases there is totally untrue. My book contains nearly 2,000 examples of words and phrases commonly used in medical science. Most of them are translated into Italian and all their pronunciations are carefully explained (including variants not normally found in dictionaries). See here, for example, here, or see pp. XV-XVI. The latter contain exactly 100 terms, all of them used in medicine and with their corresponding recorded pronunciation(s).

On the market there are now all sorts of books on medical and nursing English for Italians (see for instance here). Most of these books, though, only contain information about the grammar of English; some include info on the lexis; but none, as far as I know, deal with the pronunciation of medical terms and expressions. Also, no book in Italy explains to students how to cope with English native speakers' spoken language in the context of medicine. My book does.

Criticisms are most welcome, Camilla, but damaging and unfair ones are not!

Rant over.
Posted by Alex Rotatori at 9:00 am No comments:

Homophones and homographs in medical science

On p. 32 of the book you can see below, which is essentially about the origins and use of medical terms in English, the author Antonella Distante, who is Lecturer in Medical English at the Università "La Sapienza", Rome, writes as follows:

She claims that the words affect, flow, recall, relapse, burn, consent, transplant, implant and insert are all homophones and homographs when pronounced as nouns and verbs. Of course this is only true for flow, burn and consent, which keep the same pronunciation both when they're nouns and when they're verbs. For the rest, there's quite a lot of variation:

1) affect always has stress on the second syllable when it's a verb; the corresponding noun, on the other hand, is normally pronounced ˈaffect, though aˈffect is also sometimes to be heard in both GB and GA;

2) recall (v.) is reˈcall both in GB and in GA, though ˈrecall is also sometimes possible in GA; recall (n.) is pronounced with the same stressing as the verb, although the variant ˈrecall is also heard in GB;

3) relapse is reˈlapse when a verb and a noun, though relapse (n.) can also be ˈrelapse in both GB and GA;

5) implant (n.) is always ˈimplant in GA and GB while the verb is mostly imˈplant (LPD also acknowledges ˈimplant for the verb in RP (= GB).);

6) insert (v.) is always inˈsert and the corresponding noun is ˈinsert. Also notice that the s in both the verb and noun can be pronounced either as s or z.

Why don't some authors check with a good dictionary before offering incorrect information in their books? I wonder.
Posted by Alex Rotatori at 10:22 am 3 comments: