Another question from my students this week was why in English we say ba'rometer, with stress on the second syllable, and not 'barometer, with (main) stress on the first.
The suffix -meter/-metre in English can be pronounced in two different ways: (a) ˌmiːtə (RP)/ˌmit̬r̩ (GA); (b) mɪtə, mətə (RP)/mət̬r̩ (GA). Pronunciation (a) tends to be used 1) with units of length: 'centiˌmeter/metre, and sometimes 2) in the meaning "measuring device": 'voltˌmeter. The stress-imposing pronunciation (b) is used 1) with reference to versification: he'xameter, pen'tameter, and sometimes again 2) in the meaning "measuring device": ba'rometer. Hence the different pronunciations of the two senses of the word micrometer: micrometer/micrometre meaning "micron" is normally stressed on the first syllable (although some people also stress it on the second); micrometer the instrument, on the other hand, is always stressed on the second syllable.
In the terms altimeter and kilometer/kilometre, the two types of pronunciations explained above have been confused, giving thus rise to competing variants with different stressings. In particular, with the word kilometer/kilometre Professor John Wells has shown that, although this term is constructed on the analogy of centimeter/centimetre and millimeter/millimetre, which are stressed on the first syllable, today the -ˈlɒm- form tends to predominate both in British English and in American English. See the pie charts below: 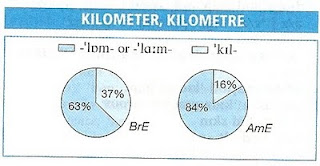 Posted by Alex Rotatori at 3:43 pm No comments: 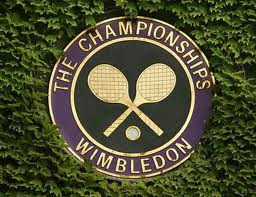 The stem Wimble rhymes with nimble, the final consonant sound being the same as in incredible, able, unbelievable. Also, the syllable-final phoneme sequence blə which they used in the version they produced is not possible as far as English phonotactics is concerned.
Finally, in RP the Anglo-Saxon suffixes -ton, -don, -ham in placenames like Southampton or Birmingham are always unstressed and weak. Not always so in General American: cf. Birmingham ˈbɜ˞mɪŋhæm.
Posted by Alex Rotatori at 11:25 am 4 comments: 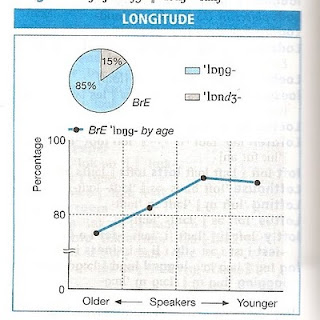 (For more on idiosyncratic pronunciations you can also read this post by Jack Windsor Lewis.)
Posted by Alex Rotatori at 11:13 am 3 comments: