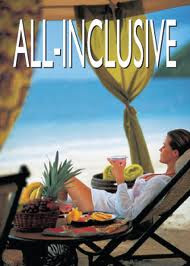 A friend of mine from Italy has asked me what the correct Italian pronunciation of the English phrase all-inclusive is. Her question wasn’t so much related to the quality of the vowels as to where to put the stress on the second word of the compound: do Italians follow the English stressing or do they shift it to another syllable?

We all know that the expression all-inclusive in English is pronounced ˌɔːl ɪnˈkluːsɪv, ˌɑːl-, -ɪŋ-, -ˈkluːz- when in isolation and that the main stress is never on the -ɪn- or -ɪŋ- of the second term of the compound, since this usually counts as a non-native learner’s error. In contemporary Standard Italian, though, this is not always the case. Pronunciations like ˌol inˈklusiv, -iŋ-, -ziv and -ˈin-, -ˈiŋ- are all possible and to be heard very frequently. The ones with main stress on the second syllable of inclusive are usually regarded as the traditional variants, that is the correct pronunciations which should be adopted in educated speech. The -ˈin-, -ˈiŋ- pattern, on the other hand, is slightly more recent and is considered by many as sloppy, although it is becoming increasingly common among educated native speakers and, in particular, among Italian travel agents.

To my amazement, the phrase all(-)inclusive is not contained in any of the Italian pronouncing dictionaries I own, but we can find it in the Devoto-Oli (2011, p.88), which dates it back to 2003 and regrettably only shows the variant based on the English pronunciation.

The shifting of stress in Italian trisyllables is particularly tricky. Trisyllabic words traditionally were stressed on the penultimate syllable (as is usual for the majority of Italian words), but today we are witnessing a shift to the antepenultimate syllable, a phenomenon which has been interpreted by linguists as a reaction to the usual pattern ·ˈ··. So, for example, (imprenditore) edile (‘building contractor’) can be both eˈdile and ˈɛdile; Florida is almost always ˈflɔrida and hardly ever floˈrida, flɔ- (though that’s what I heard last week pronounced by a news correspondent on Italian television); Kolossal (‘a blockbuster film’) is traditionally koˈlɔssal but nowadays usually ˈkɔlossal, -lɔs-; salubre (‘healthy’) used to be saˈlubre but today is normally ˈsalubre; zaffiro (‘sapphire’) is now ˈdzaffiro, (maybe also ˈtsaf-), but some people still say dzafˈfiro.

The stress patterns illustrated above are, as I said, extremely common, but sometimes still regarded as incorrect even by distinguished linguists like Paolo D’Achille, Professor of Italian Linguistics at the Università di Roma Tre. In his book L’Italiano Contemporaneo (Il Mulino, 2006), Mr D’Achille refers to these new (?) stress trends as “non standard” (p.104), despite admitting that they are all very widespread.

I personally regard these changes in stress as normal and quite unimpressive. Language changes and always has.

As linguists, I think, we should all concern ourselves with describing what the facts really are rather than drawing up and imposing useless rules which nobody abides by.

This blog will now take a break. Next post in three weeks’ time.

This week’s blog is prompted by a post on John Wells’s phonetic blog about the pronunciation of the Latin-derived English prefix quasi-. On July 14th, several of John’s followers commented on the way the name Quasimodo is pronounced in English, which made me think about its pronunciation in Italian.

In LPD (p.658), under the entry Quasimodo, one finds the note “[t]he Italian poet was kwa ˈziː mo do, kwa zi ˈmɔː do”. Strange, I thought: I’ve never heard the second variant! So I went and looked it up in the DOP (=Dizionario Italiano Multimediale e Multilingue d’Ortografia e di Pronunzia) and found that the pronunciation (ˌ)kwaziˈmɔdo is used (or rather, should be used, as the authors put it in the dictionary) in the expression domenica (di) Quasimodo (or quasimodo), another name for domenica in albis, (in the Christian Church) the first Sunday after Easter. The phrase is apparently derived from the Latin expression quasi modo geniti infantes (‘like newborn babies’), which is nowadays still (sometimes) used at the beginning of Mass on the Sunday after Easter.

The authors of the DOP also note that the name Quasimodo should be given penultimate stress if one is referring to the protagonist of the novel The Hunchback of Notre Dame (1831) by Victor Hugo, but it can also be – and today usually is – kwaˈzimodo if you’re referring to the Italian poet Salvatore Quasimodo (1901-1968).

To be honest, I don’t think this is completely true. Italians nowadays always (?) stress the word Quasimodo on the second syllable, whether they are talking about Hugo’s fictional character or the name of the late poet. The pronunciation (ˌ)kwaziˈmɔdo is considered affected and old-fashioned and I would go so far as to say that it is today totally unknown by the majority of Italians.

Canepàri (or indeed Canepari – Jack, remember?) rightly gives kwaˈzimodo as the main pronunciation and kwaziˈmɔdo as the “traditional” one, by which he means the pronunciation recommended by elocution and acting teachers in the past. This may indicate, thus, that apart from actors, no one in Italy has really ever used the variant with penultimate stress.

As far as Salvatore Quasimodo is concerned, the DiPI (p.417) makes it clear that it is pronounced “salvaˈtore kwaˈzimodo”, though this entry, too, is incomplete, as some Italians use s in the surname, others ɔ instead of o in the penultimate syllable of the same word; others still use both.

Am I wrong in this? Is there any Italian out there who says kwaziˈmɔdo, as the dictionary by RAI prescribes? 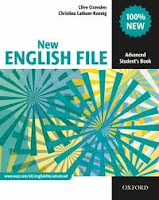 I’ve been using the general English coursebook New English File Advanced with some of my students for some time now. The book is by C. Oxenden and C. Latham-Koenig and was published by OUP in 2010.

It is an interesting book as it contains authentic texts and listenings, two-page writing lessons, video interviews, focus on lexis in context, an extended grammar bank, and – more importantly – a lot of pronunciation activities (including dictations with several different English accents).

Despite the wealth of exercises and downloadable material provided, I have to admit that some of the explanations and activities concerning the phonetics and phonology of English in the book are a bit confusing or not totally correct. This is due, I think, to the fact that the authors have tried to apply hard and fast rules to the language to make it neater and more straightforward for students when in fact no rules can be provided except ‘passively observing’ what native speakers actually say or write.

In exercise 6a on page 15, for instance, they offer a list of words and ask students to circle the only one that is different from the others. The following words should be analysed as containing or lacking the /h/ phoneme: hurt, heir, adhere, hardly, himself. Now, which one would you circle? Probably heir, which is eə(r) in RP. But what about adhere? Most people pronounce it with h but some without (cf.EPD, p.7). And what does one have to make of himself? In unstressed positions, not at the beginning of a sentence or clause, this word usually has the weak form ɪmˈself. Also, what about h-dropping? I think this is a phenomenon that should be pointed out in an advanced course book.

On page 26, a pronunciation bank on “linking” is provided:

1 A consonant sound at the end of a word is linked to a vowel sound at the beginning of the next, e.g. I met him‿a long time‿ago.”

Is this really an example of linking? Here there is no break between the words: one word just smoothly follows the other. And why then is no linking shown between met and him?

It is not always the case. Some speakers in this environment use linking /r/, others pause before the other word; others still use a glottal stop in between the two words (cf. Gimson’s Pronunciation of English, p.305).

Finally, on page 29, it’s the turn of words and phrases of French origin:

“A number of French words and phrases are used in English. They are usually said in a way that is close to their French pronunciation, and so do not necessarily follow normal English pronunciation patterns, e.g. ballet (/ˈbæleɪ/), rendezvous (/ˈrɒndeɪvuː/).”

This is not 100 percent correct. Ballet is pronounced balɛ, -le in French, with stress on its final syllable, thus more similar to GA bæˈleɪ. (Words borrowed from French are normally stressed on the first syllable in British English but they very often have final-syllable stress in American English.) And just what are normal English pronunciation patterns? Do pronunciations like ˈbæleɪ or bæˈleɪ sound strange or foreign to native speakers? 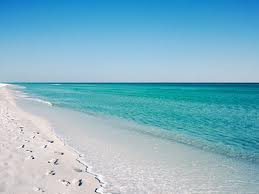 It’s summertime. Here in Italy most people are getting ready to go to the seaside. And so am I! But just how do you pronounce seaside in English? (Don’t worry, it’s not a silly question!) As far as I know, LPD is the only pronunciation dictionary which acknowledges both ˈsiːsaɪd and ˌsiːˈsaɪd. All other pronouncing dictionaries only have ˈsiːsaɪd. I myself say ˈsiːsaɪd and use the same stress pattern in the phrase seaside resort, ˌsiːsaɪd rəˈzɔːt. Are there NSs out there who have a different stressing?

Taking a look at this page from the Oxford Advanced Learner’s Dictionary online, one also discovers that Americans don’t usually use the expression going to the seaside (the OALD marks it as “especially British English”), preferring seaside as a premodifier instead. (This is also supported by data from both the COCA and BNC.)

On the same page one can find a link to the phrase whelk stall. As you would expect, the word whelk can be pronounced both welk and hwelk. As far as this latter pronunciation

goes, LPD (p.897) correctly states that “an initial hw in the sense ‘shellfish’ is not supported by the etymology”.

This statement is backed up by my Oxford Dictionary of English (2nd edition revised, 2005; p.2004), which distinguishes between the mollusc (1) and an archaic term for a pimple (2):

“whelk1 ► noun a predatory marine mollusc with a heavy pointed spiral shell, some kinds of which are edible [...].