This is prompted by reading the phonetic transcriptions contained in the Dizionario di Pronuncia Italiana (DiPI) for the following utterances: abiogenesi, abituandosi, abituo, accentuale, accentuo. How do Italians say these words?

Here’s what we find in DiPI:

(Note: the comma before a transcription indicates that the following pronunciation is to be regarded as “acceptable”; the symbol (;) stands for “tolerated” though also “not particularly recommended”; the downward-pointing arrow means “slovenly”.)

I find the above transcriptions somewhat inconsistent. Why would a compressed pronunciation be “acceptable” in accentuale but “tolerated”/”not particularly recommended” in accentuo? What’s the reasoning behind this decision on the part of the author?

In SIP, sequences of i/u plus another vowel are normally pronounced as rising/crescendo diphthongs (=compressed), the close vowels being realised as j and w respectively. But in less hurried/more emphatic speech, the uncompressed variants with vowel hiatus are always possible. Thus for dizionario I can say ˌdi(ts)tsioˈnario, ˌdi(ts)tsjoˈnario, ˌdi(ts)tsioˈnarjo, and ˌdi(ts)tsjoˈnarjo. The same for italiano: (ˌ)italiˈano, (ˌ)itaˈljano.

The town in which I was born is called Tarquinia. Again this can be both tarˈkwinia and tarˈkwinja (perhaps also (ˌ)tarkuˈi- in carefully articulated speech).

So that's how I would transcribe the five words above:

(Note: the comma and the (;) symbol here are used only to separate out the different pronunciations and don't imply any degree of ‘acceptance’/’tolerance’.)

The symbol (→) could be taken to mean the same as in John Wells’s LPD:

“For some speakers, a form shown with → may correspond to the way a word is stored in the mental lexicon, whereas for others the same form may be derived by phonological rule”. (p.xxviii)

What I’ve tried to describe here is what we might call la ˌkompresˈsjone‿itaˈljana.

I’m sorry I wasn’t able to post any article last week and the week before. This was due to serious family problems.

What do you make of the following newspaper headline? (Click on the picture to enlarge it.) 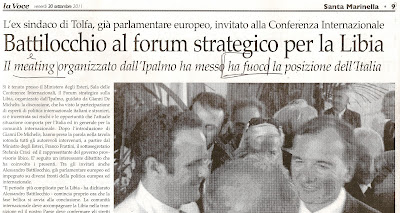 Look at the expressions I have highlighted. I’m sure most Italians will be able to spot the mistakes and correct them.

The article dates back to Friday 30th September 2011 and is about a meeting, organized by the Italian Institute of International Affairs Ipalmo, which was held to discuss the situation in Libya before Colonel Gaddafi’s death.

Translated into English the headline would sound something like this: “The meeting organized by Ipalmo focussed on Italy’s attitude (towards Libya)”. In Italian it reads: “Il meating organizzato dall’Ipalmo ha messo ha fuoco la posizione dell’Italia”.

Yes, you probably noticed that the word meeting is spelt as *meating. The (incompetent!) journalist confused the noun meat with the verb (to) meet, and that’s because these lexical items are homophonous in most (all?) varieties of English.

I wonder how this spelling mistake could have occurred, meeting being an extremely common word in Italian. The Devoto-Oli dictionary (2011) says it has been in the language since 1819 (p.1681). I’ve never seen it spelt wrongly.

The second dreadful mistake is to be found in the phrase “ha messo ha fuoco”. This should be ha messo a fuoco, the preposition a having no h in the spelling.

As my readers will know, h is not part of the Italian phoneme system since it is only sometimes used paralinguistically in exclamations or interjections such as hai!/ahi! (‘ouch!’), (h)ai, or poh! (‘oh, no!’), pɔ(h), p(h)ɔ. In writing h is used to distinguish the verb forms ho, hai, ha, and hanno from o, ai, a, and anno. These are all homophones except potentially for the pair ho – o, the former being pronounced ɔ whereas the conjunction is usually o. (The name of the letter o, though, is generally ɔ, like the verb.)

It is shocking to hear that some primary school teachers in Italy, when having to explain the difference between ha (from avere) and a (the preposition), sometimes get their pupils to ‘aspirate the verb’, thus producing the extremely unnatural ha. Don’t they know that writing is one thing and speech is another?

English native speakers interested in Italian will be glad to know that the new edition of Practical Phonetics and Phonology (Routledge) soon to be published will include an article on Italian phonetics which B. Collins and I. Mees have co-authored with me. This new section will also feature audio clips with my own voice.
Posted by Alex Rotatori at 9:00 am 3 comments: